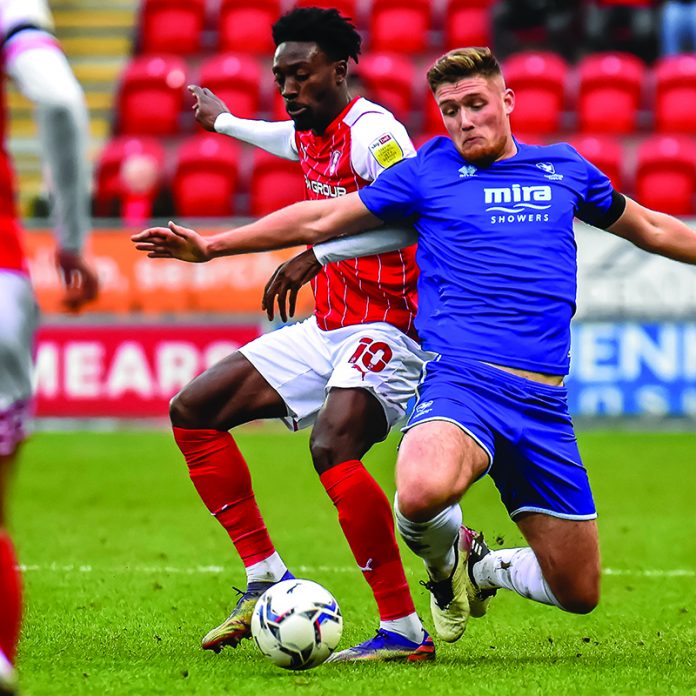 Cheltenham Town are without a win since late November, and after some tough results where draws felt more like two points dropped than a point gained, the Robins now need to find points from somewhere if they are to avoid a battle for relegation.

Michael Duff’s side lost 1-0 to Rotherham to change the side’s form after three consecutive 1-1 draws. This feels now like a season-defining stage with some tough games coming up, and Cheltenham need to find performances so they don’t slip towards the foot of the table.

Duff praised his side’s performance despite the result and gave his thoughts on a challenge on Will Boyle in the build up to the goal.

it was a foul. Ultimately that’s the difference in the game. Where we are at, we need a bit of luck, but we need the referee to make the right decisions, which we are not in control of. Other than that, I thought it was a good performance.

After a few recent fixtures where many refereeing decisions went against the Robins, Duff went and spoke to the officials at half time.
“I just said to them I had got beyond getting angry now. It’s pointless. I have to be careful how I use my words, but I didn’t think he had a very good game. It’s pointless getting angry. It was decision after decision after decision. Ultimately, coming away to a top of the league side, you need a referee… I don’t know what the foul count was, but it was probably a joke.

“I think they’ve had two shots on target, which tells you a lot about the performances. Results we can’t seem to get at the minute, but performances have been good. We have to keep cracking on, working hard and we need something to drop for us. “First half we were a bit scrappy and we just wanted to fight and didn’t pass the ball. Second half we found a few passes and could play into the front, so they took the information on well. I thought there was a 10 or 15 minute spell at the end when I thought we were going to get the equaliser.
“Their record is the reason they have been top of the league. They have not lost here since the first week of September. It was a good performance. I’ve said to the players, during the first half of the season, we have been away to a few of the big boys and rolled over and had our bellies tickled. “Today, they know they have been in a game. The Wigan and Sunderland games it was men against boys. We didn’t look like we deserved to be on the same pitch as them. Today, that wasn’t the case at all. We went toe-to-toe with one of the best teams in the league and were unlucky to lose the game.”

Only one January signing started for Cheltenham, a sign of the growing competition in the squad. Duff praised all of the signings and commented on how they’d fit in since joining the squad.
He continued: “There is quality definitely – you walked in the door and you saw that today with the lads that came on. Charlie Brown is a little bit unlucky he hasn’t got on the pitch yet, but that’s just the way the games have panned out. Two of the lads didn’t travel with us today, so we have to get them up to speed. I thought Kion (Etete) looked a handful when he came on. AJ (Aaron Ramsey), you could see with a few of his touches, it’s a little bit quicker that he’s used to and he’ll have to get used to that, but he can definitely play. We are pleased with what we’ve brought in and it was a good performance.
“We want that quality and that togetherness. The thing that I liked, even the lads that came off, after a couple of minutes’ disappointment they are up on their feet, encouraging their teammates and the people who have taken their place. It doesn’t feel or look like a team that hasn’t won in a while, but there is no getting away from the fact that we haven’t. “Anyone who was here would have seen it. Sometimes you look at a team and you can see they are devoid of confidence and I don’t think we look like that at all. We don’t look like a team that’s not prepared to run around for each other either. That’s not to say we’ll be all right because we have to keep working and that’s what we’ll do.”