A home for Thor at last! 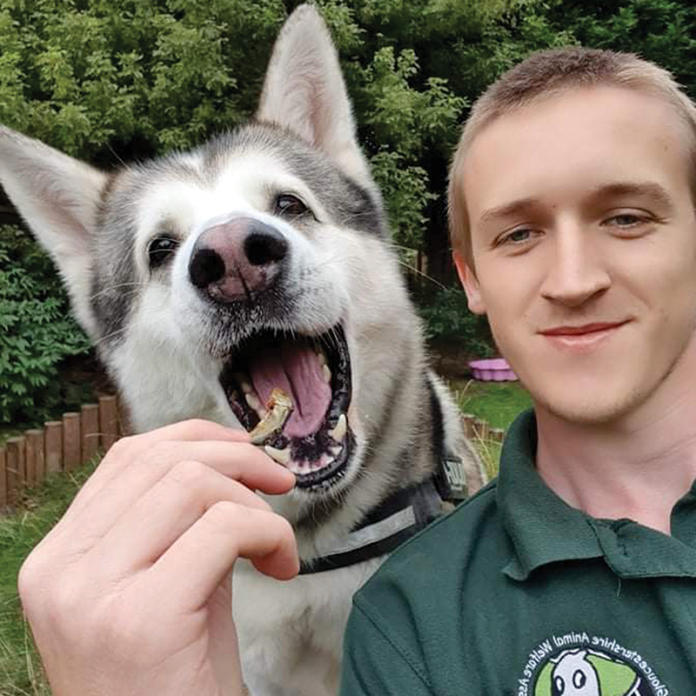 At the end of January 2020, 8-year-old large Malamute dog Thor was taken to Cheltenham Animal Shelter due to very sad circumstances following the death of his owner, and now needed a new home.
Dogs like Malamutes can sometimes be aloof and uncertain of new people or other dogs. When Thor was first taken to the shelter, based in Gardner’s Lane, Cheltenham, he was anxious and grumpy. He was vocal with visitors and didn’t like getting too close to other dogs.
Now, almost 2 years on, Thor has now found a new home at last.
Head of Fundraising at the shelter, Alison Jarvis said: “We were concerned that he wouldn’t settle at the Shelter and his behaviour would put people off from wanting to adopt him.
“We needed Thor to settle as quickly as possible so that we could work with him to improve his confidence with people. Our Behaviourists Rosie and Esther put together a training plan and his daily routine was strict.

“Thor was given counterconditioning sessions which were designed to teach him how he could learn to befriend people. This was slow work, but it had to be done if Thor was to have a chance of finding a new home. Potential adopters could be put off if Thor didn’t respond well to first contact.”

As time went on Thor progressed, he became more trusting and started to enjoy Shelter life. He loved his food, learning new tricks and having lots of cuddles, and he also enjoyed having a selfie taken on more than one occasion!
“We keep all our dogs as mentally stimulated as possible and Thor was no exception, he loved our sensory garden where he could roam off-lead and really enjoy the plants and other equipment. We also like to celebrate special days with our dogs so back in April 2021 Thor celebrated his 9th birthday. He was made a real fuss of and because it was his special day, he was allowed a Puppuccino and a Big Mac to celebrate,” Alison added.
With dogs like Thor, it can take a long time to find a new home.
Thor is an older dog and likes to potter around. He has arthritis in his hind legs and so needs medication and cannot go on long walks. Finding a family who could cater for the needs of a big dog with special needs was always going to be difficult but those at the animal shelter never gave up hope of finding a home.
Alsion said: “As time went on and we continued our search for a suitable home for Thor, he became a little bit of a local celebrity! Many people in our community would ask how he was getting on and had we been able to find the right home for him yet? Although we were able to tell them that he was happy, sadly we still hadn’t found the best home for him.

“We ran campaigns and promoted Thor and other long-stay dogs, but few people came forward and those kind people that did, often didn’t have the experience or facilities to meet his needs.
“We were getting concerned that Thor would never find his forever home, then last summer a family came forward who had experience of dogs like Thor – so we began the process of introducing him to them.
“Over several months the family made repeated visits getting to know Thor, spending more and more time with him. Their dedication was amazing and slowly Thor got to know them and became excited to see them. “The time when a dog and prospective owners start the process of adoption can often be emotional for everyone as sometimes the meetings don’t go to plan or for various reasons the prospective adoption can fall through.”
It’s fair to say that because Thor was at the shelter for so long all the staff were touched by him. “we loved his cheekiness and the way he would bat you with his paws and howl at you if you dared to stop fussing him or hadn’t gotten a treat out quick enough. He would always bash on the office door until one of the carers let him in for cuddles – he was very persistent. We loved how much he trusted us even letting us put a birthday hat on him and dress him in a lion’s mane! He has a huge personality and was affectionately known as the King of the Shelter.
“When we saw how well Thor was reacting to his potential new family, we were so proud of him. It had been such a long road with him that it was the best thing to know that he could be in a loving home where he would be adored – just as he deserved!”
Just before Christmas Thor started his home visits with his prospective new family. The shelter’s behaviourists took him to their home and left him with the new owners for increasing amounts of time. They had to be careful that Thor didn’t become anxious as the shelter carers needed him and his potential owners to feel happy.
“We shouldn’t have worried as these visits went so well that Thor was often asleep on the sofa at pick up time! The final test to see if Thor would settle was to let him stay overnight, again we needn’t have worried, and after several days we knew that Thor had found his new home.

“The last day with Thor at the Shelter was bittersweet as we knew we would miss him terribly, but we were happy that he was off to have a good life! The team had lots of cuddles with him and of course a selfie session before taking him to his new home.” Cheltenham Animal Shelter General Manager, Peter Newcombe said: “We are beyond delighted that he’s found such dedicated owners who love him as much as we do.”
Thor has now settled in his new home, his training continues, and he is being introduced to his wider family. Thor has enjoyed his first Christmas at home with Claire and Rich his new owners, who said: “Thor has settled very well, and really enjoyed his toys he was sent home with and the ones he had for Christmas.”
Alison Jarvis summarised: “Quite simply this is one of the best pieces of news we could report. This wonderful big, goofy dog spent just under two years at the Shelter, but we never gave up and nor did you our supporters and our community. Thank you.”